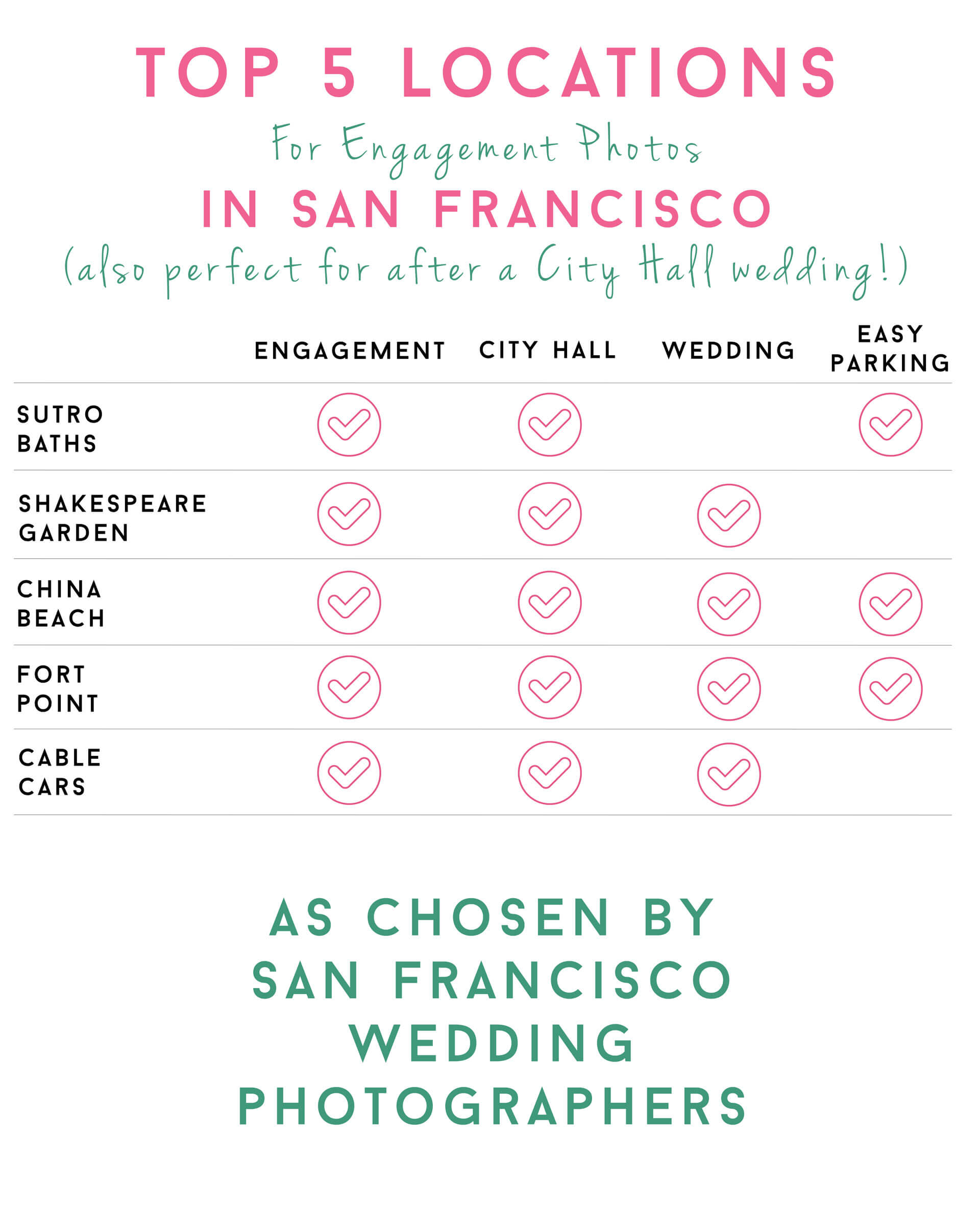 The Best Places in San Francisco for Wedding and Engagement Photos

If you’ve been following our blog lately, you’ve seen some glimpses of our absolute favorite places in San Francisco.  Well, for photos that is!  When couples ask us to take them somewhere in the city for engagement photos, or recommendations for where to head after their San Francisco City Hall wedding, there are five places that immediately come to mind.

And now we’ve put all five spots into one handy dandy post, just for you!

Looking to have the ocean prominently featured in your photos while looking like you’re practically walking on the water?  We got you.  How about beach photos?  Or wedding photos underneath the Golden Gate Bridge?  Or even engagement photos with one of a kind historic architecture?  How about photos right in the heart of the city, surrounded by buildings while standing in front of one of the most iconic features of San Francisco?  We can easily get you there, and give you some amazing photos to boot.

And if you’re not ready to go there with us, you have to at least read about it.  So let’s go!

Go to the Sutro Baths on any day and no matter the weather, you’re likely to see a photographer in action. Why?  There’s no other place like it!  Walking along the Sutro Baths is almost like walking on water. The images you’ll get from walking along the old walls of the baths put you mere inches from the water’s surface. Near the ruins of the Sutro Baths lie a rocky shore, a sandy beach during low tide, and a very cool cave that we love guiding couples to for some breathtaking photographs. Whether it’s for an engagement session or photos after your San Francisco City Hall wedding, every element of the Sutro Baths makes for some unique photos.

There is a short hike down to the Sutro Baths, but due to the sand and steep incline we highly encourage flat shoes to make it easier to venture down. Ladies, if you’re thinking of wearing heels, be prepared to carry them down to change into later.

An added bonus is the free parking, which we’ve found to be ample every day of the week!

Read more about the Sutro Baths.  You have to learn about its history – it’s so interesting! 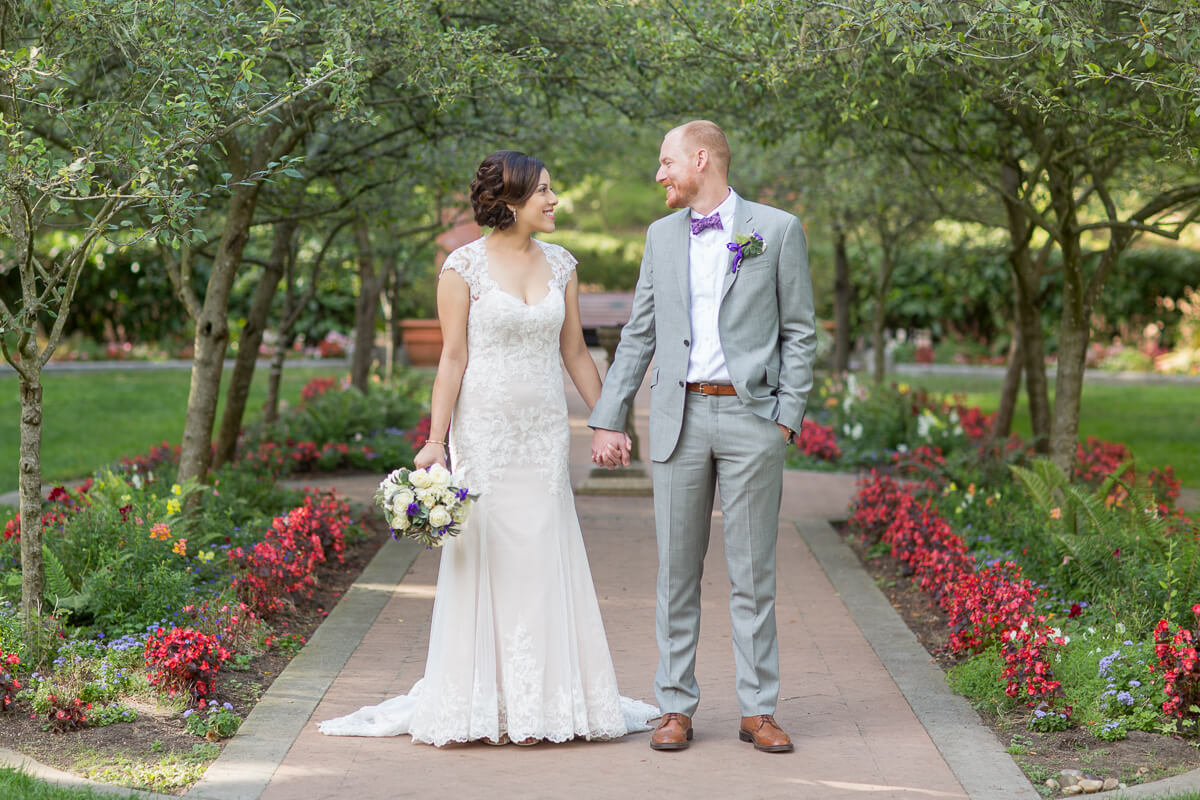 Everyone knows that Golden Gate Park is a huge, sprawling jewel of the city, filled with innumerable gorgeous locations perfect for any and all photo ops. But not everyone knows about Shakespeare Garden, a hidden gem within Golden Gate Park. At its entrance stands a classic wrought-iron gate that leads to a romantic garden, perfect for wedding ceremonies and engagement photos alike. Since it’s part of the public park, you’ll often find visitors enjoying the sights from a picnic bench or simply strolling the grounds.

We particularly love this location not only for its charm, but for the always perfect lighting. An extra bonus is that this park is located in one of the most beautiful parks in the world; it’s easy to find little spots for impromptu photos as you meander through Golden Gate Park toward Shakespeare Garden. 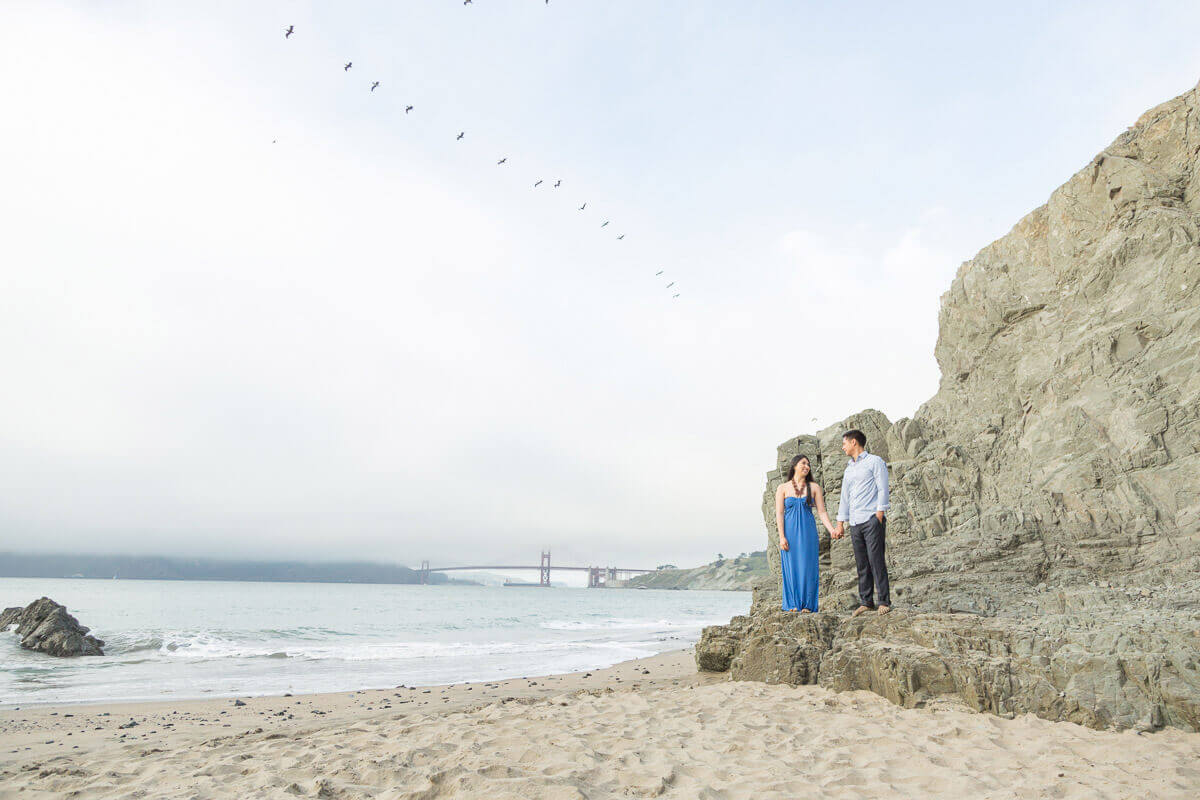 When scoping out the best spots for wedding or engagement photos on the beach, it’s likely you’ve come across Baker Beach. Wildly popular with excellent views of the Golden Gate Bridge, Baker Beach is a popular spot for photo ops and get-togethers alike. Due to its popularity, we find that it’s a crowded spot most days of the week.

Enter China Beach. We’re hesitant to even give this incredible location away! When it comes to engagement and wedding photos, this beach has it all: a sandy beach with no crowds, easy parking and incredible views of the Golden Gate Bridge. It’s so easy to access that we can even hit China Beach before or after visiting one of the other spots on this list! 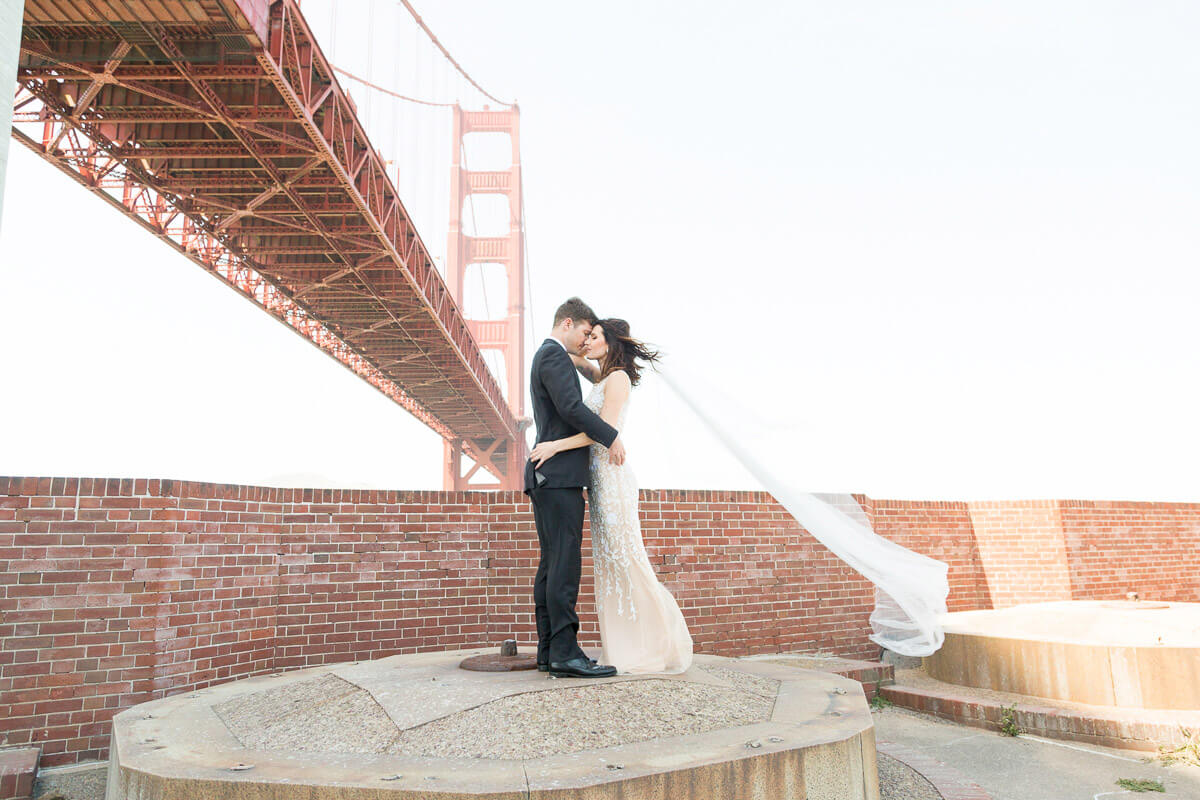 Many couples yearn for an iconic San Francisco backdrop for their engagement or wedding photos, and what’s more iconic than the Golden Gate Bridge? You won’t get any closer than just under the south end of the bridge, which is where Fort Point lies.

While the impressive Golden Gate Bridge looms overhead, you’ll appreciate the architecture of Fort Point dating back to 1853. The buildings of Fort Point create a fantastic setting for both engagement and wedding photos. Fort Point was built in the 1850s (completed in 1861), originally as a state of the art defensive system during the Gold Rush and the brick buildings still stand strong today.

Fort Point is a popular destination for tourists and locals yearning to soak up the history of this spot that helped to both create and defend San Francisco. Before it became an army outpost in 1846, it served as a Mexican fort, and before that in 1776 as an outpost for the Spanish. This truly is where San Francisco originated. To get to Fort Point, you have to drive through the Presidio, so taking photos throughout the Presidio is always an option.

Read more about Fort Point and its incredible history. 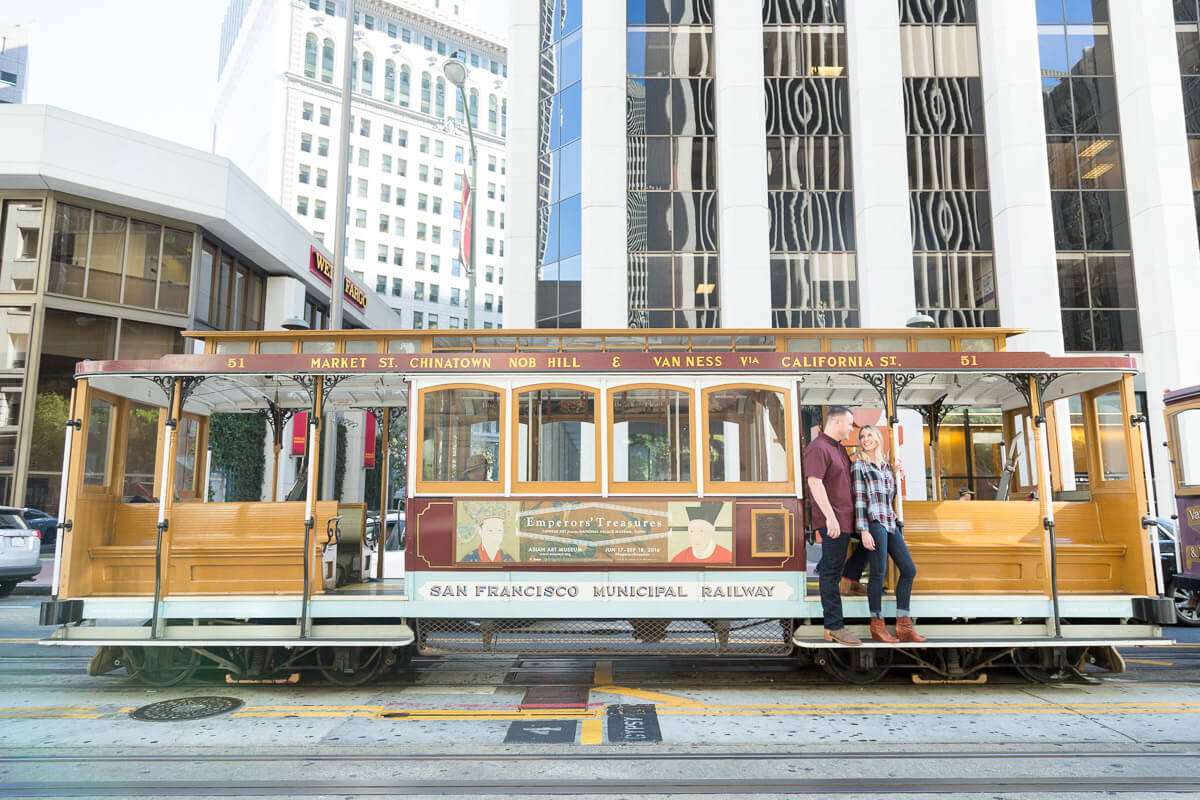 This is one of our most requested photo ops, especially after a San Francisco City Hall wedding.  It’s easy to drive over to our favorite Cable Car right after a ceremony for some really fun photos.  The Cable Cars are an iconic, historic part of San Francisco that you just have to experience.  While they are a huge draw for tourists, we local photographers love to take advantage of them for some of the best photos in San Francisco. It’s simple to hop aboard a car or pose in front for a quick shoot.  Instant fun and whimsy with these photos!

Read more about the Cable Cars and their unique history.

There are of course more than five spots in San Francisco where great photos can be taken for your wedding day or engagement session, but these are the five that always pop in our heads when we think of the best locations for engagement photos in San Francisco. And since they all double as wedding photo locations, including after San Francisco City Hall weddings, we find them to all be simply perfect choices.

Here’s a quick summary of our list for easy pinning: 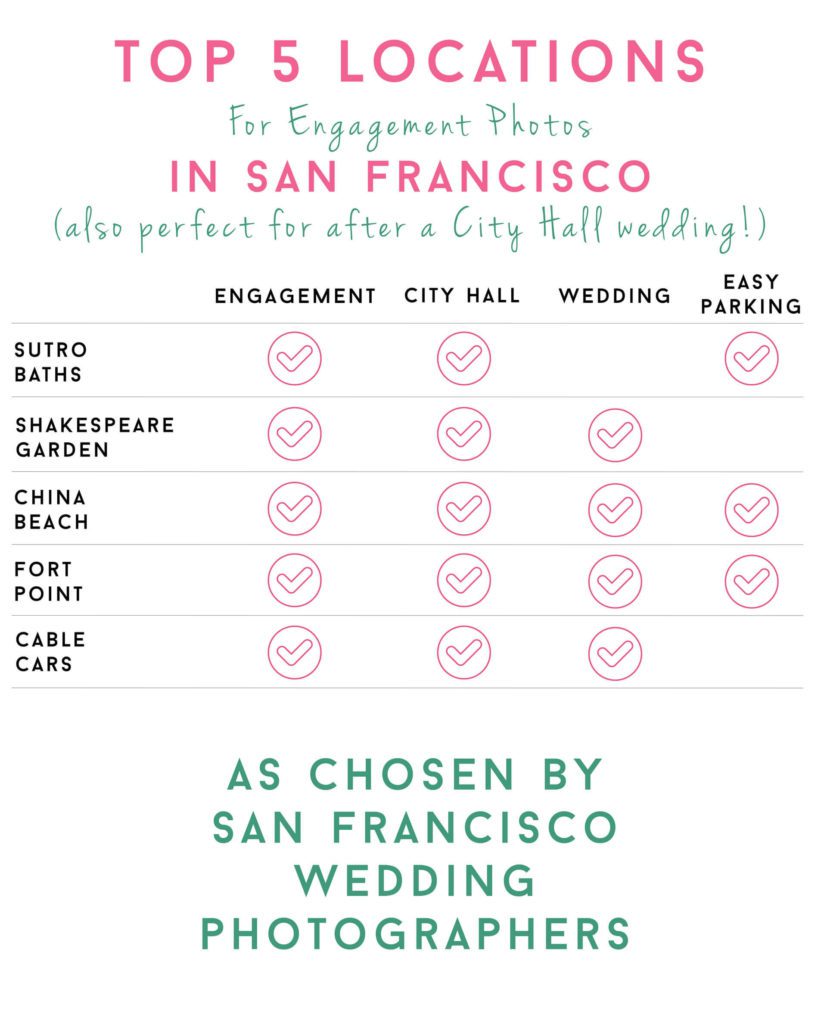